A competition for the most original and interesting legend dedicated to the competition and having a realistic basis was announced in May 2012. The competition aroused great interest by guests of the Amber Museum and its site. Competition organizers were Kaliningrad Amber Museum, info portal "Klops.ru" and Smithing Yard «Horseshoe».

Valeria Gutoryova had an interesting idea of using old Prussian names for the legend heroes. The presented legend was based on it. The installation received the name "Throne of Destiny", there will be a memorial tablet with the legend near it soon. Трон впервые был представлен калининградцам во время Музейной ночи 2012 года в программе «Конца света не будет!».

For the first time the throne was presented to Kaliningraders during the Night of Museums 2012 within the programme “There will be no End of the world”. Everyone can sit on it and take a picture with to get wealth and prosperity, rub eager beaver ant that sits on the forged armpad on a piece of sunstone.

Legend of the Throne of Destiny

Once upon a time many years ago, when the Earth was young, ancient gods were living with humans and all the plants, animals, birds and insects served them truly.

If elderflower blossomed by the window – people knew that corn god Pushkaito was merciful to them and were ready to reap a good harvest. If the sea brought a piece of amber, it meant – sea god Autrimpo allowed to cast a net. If a person saw a red ant – messenger of god Pilvisto – came to his or her house – wait for wealth. The god of wealth and abundance – Pilvisto, who was sitting on his throne in tangle of holy oak branches in the forest near Heiligenbeil, he sees all person’s doings and helps only the most worthy persons.

Once he saw a desperately crying girl by the forest lake. Young and beautiful Nameda – daughter of the village head was meant to merry an old and surly, but very rich judge Smargan according to her parents’ wish. Nameda was in love with a fisherman Vassegaud for a long time, but she knew that her parents wouldn’t allow her to merry a poor young man. Every day Nameda came to that forest and cried, she didn’t know, Pelvisto was watching her.

Took the god mercy on Nameda and decided to help her.

So in one sunny morning Vassegaud put out to the sea in his boat, cast a net into the sea – and his net was full of sun stone and there was a small red ant inside each of it – what a miracle!

In a blink Vassegaud became rich and there were no barriers for their love.

Nameda and Vassegaud made a wedding. A lot of people came to wish them joy and to be happy, but the main guest was Pelvisto god. Self-sacrificing love of young people had touched him so deeply that he decided to give them a present – his throne, which he had looked after people doings from. Vassegaud family gave this throne from generation to generation.

On the armpad a red ant has been always sitting and everyone, who will touch him, he foretokens wealth and prosperity. 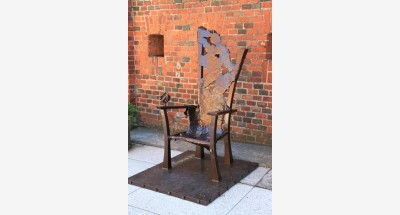 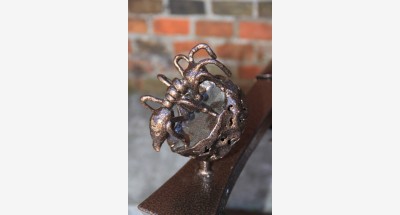