"Silver Goblets of the 17th–20th centuries"

An exhibition of silver goblets from the 18th–20th from the private collection of the "Antique Salon Königsberg" has been opened in the Amber Museum.

There are bowls created at the historical centres of art silver working – Germany, Britain and Russia.

In the medieval times goblets were customary made by the best goldsmiths as an attribute of the solemn ceremony – an eminent guest (prince, king, emperor) visiting a new city, participating in the cathedral consecration, oath taking had to raise a goblet with a welcoming drink as the sign of respect. To make them, masters of that time often used silver because of its plasticity, longevity, capacity for mirror polishing, multifold possibilities for chiselling, engraving, enamelling, blackening, and gilding. The work was engraved with a memorable inscription – to whom, when, where and on what occasion the goblet is given.

In the second half of the 20th century award goblets became wide spread due to popularity of national and world sports competitions (tournaments, regattas, matches, championships, olympiads). There were shooting guilds almost in every town in Germany, men took great interest in horse running and sailing races. In the exhibition there is a series of sports prizes for their winners – for example, the goblet for the 12th Shooting Competition in Nuremberg (Germany) in 1897, award goblet of the yacht club "Courland" made in 1907 in the Russian Empire, and others.

Goblets custom made for professional communities are in a separate show case. On such works goldsmiths depicted attributes of this or another profession – one of the goblets, probably meant as a present for a doctor, we will see a figure of Hippocrates, on the other one – allegorical image of Christian virtues referring us to justice.

The tradition of silver goblet making roots in the antique times, revives in the European art of the Middle Ages and continues today.

The exhibition will work until 16 September. 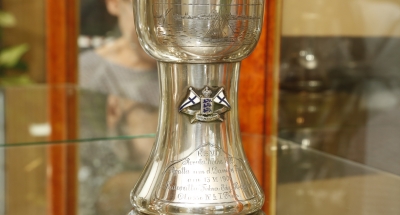