Opening of the exhibition of one show-piece

Within a short period of time, from 15 to 18 August, there is the unique artefact presented in the Amber Museum's exposition – gag bits decorated with gold and silver. They were found in a warrior's burial, who had a high social status, in 2017. The horseman rested in the ancient necropolis of the 4th–7th centuries, the archaeologists call it "island of the dead".

Along with the warrior, cremated after his death, there were his four horses buried next to him. Harness of the found gag bits was made in the shape of the head of the Scandinavian God Odin in a horned helmet. As Konstantin Skvortsov, the research fellow of the Kaliningrad Regional Amber Museum, one of the leaders of the Sambia archaeological expedition of the Institute of Archaeology RAS, told at the opening of the exhibition, it took about six months to restore the found artefact, as for almost 1500 years the object was in the very aggressive environment.

Archaeologists believe that the gag bits were made by an unknown Langobardian jeweller, who live in the North of Italy and mastered the ancient technologies of metal work, including precious ones.

There are also photographs of the artefact before the restoration in the exposition.

The Amber Museum expresses gratitude to the Institute of Archaeology of the Russian Academy of Sciences. 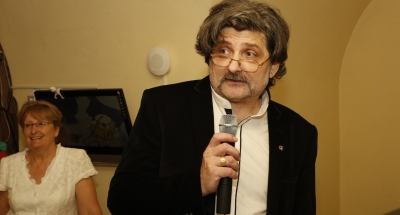 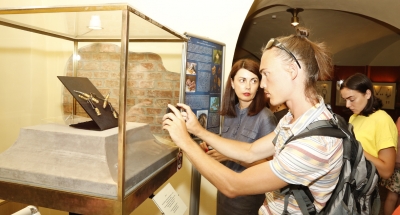