Presentations of works of Alexander Yuritsin

Alexander Yuritsin is a Kaliningrad well known amber carver, member of Kaliningrad department of Creative Union of Russian Artists. His first passion was graphics. Experience of graphic miniature creation was useful for Alexander Yuritsin in working with amber; he started making transparent amber sheets engraved in entails technique. He manages to create perfect carved amber compositions. He does not only continue traditions of west European and Russian artists, but also exposes new possibilities of the Baltic gem creating philosophic works full of rich content. This master exceeded the bounds of common for amber art images and canons in his creative work. He made his own picturesque world that combined such different themes, styles, stories and cultural traditions.

Works of the artist are kept in the World Ocean Museum, Kaliningrad Amber Museum, as well as in private collections in Russia and abroad. During some years he cooperated successfully with Japanese jewellery company “Beoluna”.

Alexander Yuritsin has been working with amber since 1992. Since 1998 he has been participating permanently in the regional exhibition “Baltic Gold”, as well as in other projects like all-Russian and international contests of contemporary jewellery art in Kaliningrad Amber Museum. 2010 he was a prize winner in the nomination “Creation of artistic image” of the competition “Amber Autumn”.

In recent years Alexander Yuritsin has been fascinated by Old Icelandic, Germanic and Scandinavian mythology and took an active part in realization of the project “Prussian Honey”, which became widely known in the region and outside of it. He defines stylistic and creates sketches of most of the molding works produced by the company. 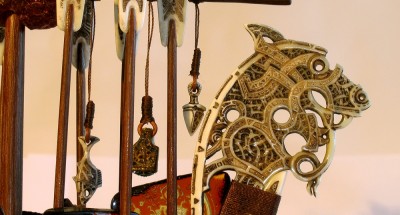