The project "Microworld of Amber" has been intended to popularize natural and scientific collection of the Amber Museum. In the course of exhibitions we present inhabitants of the "amber" forest and tell about their life. Items that due to different reasons are not exhibited in the museum's permanent exposition often become showpieces of the project.

Arthropods in larval stage are rather rarely to be found in Baltic amber. Predominantly, these are larvae of beetles, moths, ants, dipterans (mosquitos and flies) and nymphs of stone flies.

Larvae of xylophage beetles (photo 1) are most widely represented, they inhabited inside of a trunk. Surely, they got into resin, however the inner stem resin masses became opaque amber, whose optic characteristics do not let distinguish a fossil organism.

Nymphs of cockroaches (photo 2), that inhabited the "amber" forest floor and were very active, are also often to be found in amber.

Larvae of lepidopterans are rare (photo 3). They fed on leaves, flowers, so they had small chances to get into the resin, flowing down bark of the tree.

To the contact with resin insects often responded with the stressed behaviour. On the photo No. 4, there is an adult ant at the moment of rescuing the larva, which resulted in the death of both.

An interesting fact: sometimes, nymphs of representatives of the water fauna are to be found (mayflies, caddis flies, stone flies), inhabiting water bottoms. 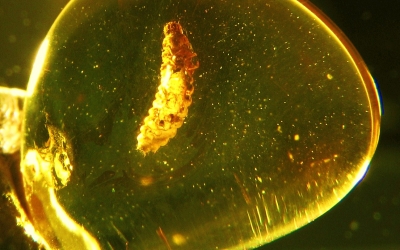 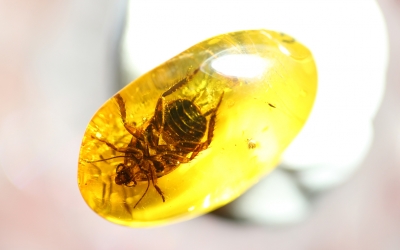 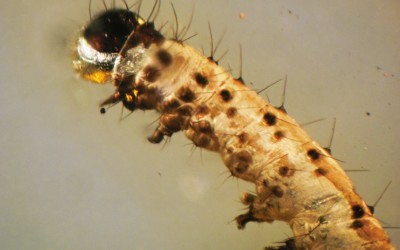 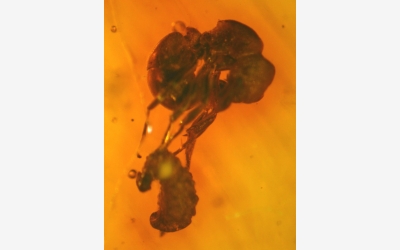