The pipe consists of two parts: amber mouthpiece and wooden shank decorated in the joint place with a wide strip of white metal. The shank has oval form, decorated on the edge with a metal ribbon with engraved styled floral ornament. Side walls of the shank are incrusted with metal insets: on one side – image of a tower, on the other side – ornament element. The lid consists of an oval amber insert with an encircling narrow metal ribbon with floral ornament. Amber is cloudy, semi transparent. Below, the shank turns gradually in the pipe, which continues with a mouthpiece - round, plainer on the outer side, amber of dark brown colour, opaque.

The tobacco box has rectangular shape, vertical, with a hinged flap-cover. It is made of wood of the dark colour. There is a metal incrustation with graphic image of a tower on one of the sides, and the opposite side is covered with two carved rectangular coloured amber panels placed very close to each other, but on different levels of knight. On the upper panel, there is an image of a knight in armours climbing stairs, on the other panel – a figure of standing woman facing the knight On the lid, there is a yellow transparent and semi transparent amber inset. Edges of the base and the lid are framed with white polished metal with embossed front side decorated with leaf ornament. On the back side of the cover, sign of the author is engraved – the latter "Л" (L) in a circle.

Gennady Losets was born on 15 February 1942 in Bolotnoie of Novosibirsk region. Since 1958, he has been living and working in Kaliningrad. He worked as interior designer at the Baltic Shipbuilding Factory "Amber" ("Янтарь"), where he became keen on applied art: embossing, wood carving, etching, enamelling. In 1974, G.Losets graduated from the National University of Arts named after "N.Krupskaia" in Moscow, faculty of painting and graphics. In 1976, he started working with jewellery, became keen on amber. In 1989, he entered the USSR Union of Artists, since 1992 – member of the Union of Russian Artists. In 2004, he was awarded "Honoured Artist of the Russian Federation". He has been participating in exhibitions since 1971.

Works by the artist are in the collections of: 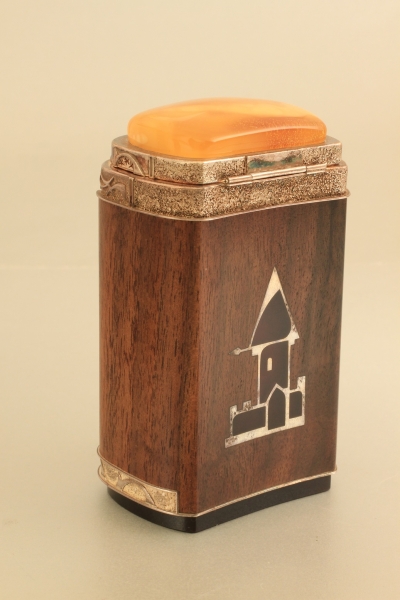 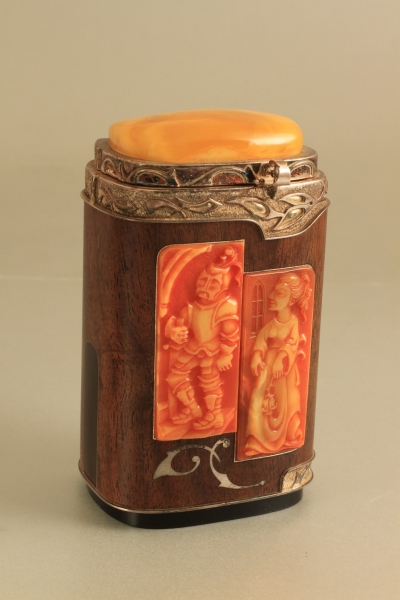 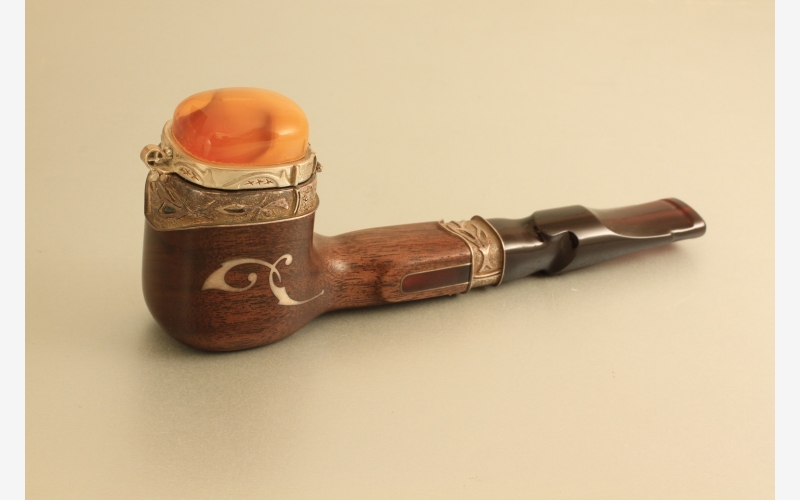