The artwork was exhibited at the Second International Biennial of Amber Art Works "Alatyr 2007".

The pendant is made in the shape of ship and fish. The main central part is made of silver, the eye, the fore and tail parts – from transparent yellow amber covered with an oxidised crust from the backside. Along the body there are several rows of perforated round holes resembling illuminators; on two lower rows of these holes prominent copper rings are soldered onto. Under these rows there is another row of round amber inserts in copper setting. Closer to the tail part a hinge stands out, on which a wheel fastened. On the end of it a rotating ship screw bolt is mounted. A carved curved metal panel with nacre inserts frames the lower part of the body. The collar consists of two detachable parts and is connected with the pendant with a thin metal clamp.

Natalia Lapinus was born in 1967 in Smolensk. Since 1982 she studied in Krasnoye Selo College of Art Metal. In 1986, after graduating from the college as an artist-master qualification, worked at the Kaliningrad Amber Combine, where she produced works based on her own designs. Since 1990 – jewellery artist at the Kaliningrad Art Foundation. Member of the Union of Russian Artists since 1993. 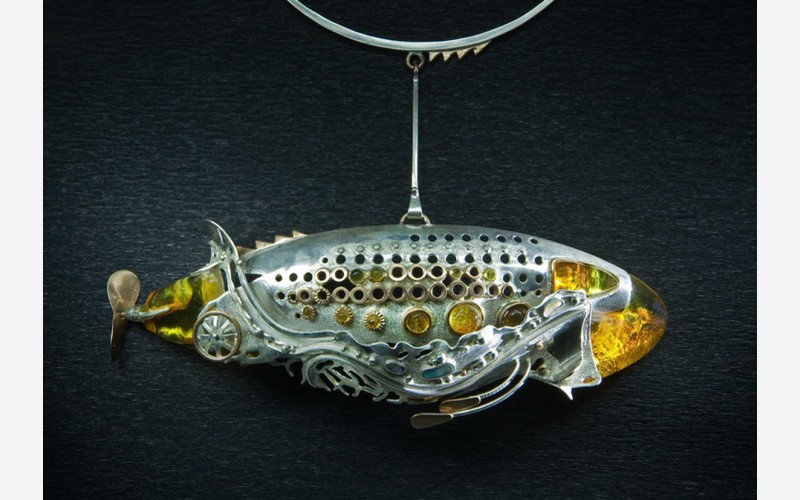