"The Dohna Tower as Witness of the Victory"

Towers "Wrangel", "Dohna" and the Rossgarten Gate, being a whole complex of fortress architecture, were built in the middle 19th century. After the First World War, they were remodeled into the recreation zone in Königsberg, however after the Second World War started they became again military facilities. Warehouses of small arms, combat and signal equipment were located there until the autumn 1944. Again military guards emerged next to them.

When the Soviet troops crossed the border of East Prussia in October 1944, the German commanders had to use the second defensive bastioned outline as the third defensive position in case of Königsberg assault.

Both towers "Wrangel" and "Dohna" were prepared for the warfare. This process was significantly forced by the start of the East-Prussian Operation on 12–13 January 1945. In the towers earlier bricked-up embrasures were opened, engineering survival systems were arranged, casemate cannons were brought and installed, conditions for small-arms shooting were created. At the approaches to the towers and the gate, field fortifications (trenches, dug-in positions, blindages, and ammunition supply pints) were hastily erected, and barrier works — explosive (anti-tank and anti-personnel mine fields) and non-explosive (hedgehogs, knife-rests, wire-fence obstacles, and razor wires) served to protect them.

Our forces had to pull through all this in the last days of Königsberg  assault 9–10 April 1945.

It wasn't possible to find any detailed description of the fighting for the Dohna and Wrangel Towers in the archives, maybe there was none at all, memoir sources are very contradictory. Here are some of them:

"Divisions of the 61st infantry corps, going over to the offensive towards De-vau (a Königsberg airdrome.— note by А.О.), conquered it, receiving from the army commander the direction to attack South, after the tough battle they broke the organised resistance of the enemy in the district, located to the South-East from the Oberteich lake (now the Upper Lake — note by А.О.).

The rest of the beaten enemy infantry division, thrown from the secured lines, gained a foothold in the fortifications "Wrangel" and "Der Dohna" (read: in the towers "Wrangel" and "Dohna" — note by А.О.) — on the south-western and south-eastern shores of the Oberteich lake. A detour of the lake from the South would present severe difficulties and cause great losses. Then a commander of the 343rd rifle division decided to win crossings in the northern part of the water barrier at night and carry forward the advance along its eastern shore. The 370th rifle regiment had to fulfill this task.

On 9 April at 3 o'clock, the regiment reached the crossing to the north of the fortification (tower. — note by А.О.) and, conquering it, crossed to the eastern shore, from where they began the attack to the south. The 378th and 356th rifle regiments continued to clear quarters from the enemy on the the western shore of the lake. The whole day long, the combat actions went keeping the level of tension. By the evening, parts of the division reached the fortifications (towers — note by А.О.). Hitler soldiers that entrenched there fought so desperate as if they were doomed to die. Until the dawn, fortifications (towers — note by А.О.) were under incessant  and heavy fire of artillery ,mine throwers and small arms. Succumbing the onsurge of he division soldiers, their military posts sent truce envoy, and at 21.30 fascists capitulated".

In the newspaper "Kaliningrad Komsomolets" (10 April 1984), participant of the Königsberg assault I.I.Shuster claim: "On 9 April at 10.00, our troops conducted a force crossing of the today's Upper Lake and captured one of the city districts. Forces of the 2nd rifle division of the 81st rifle regiment entered the area of Lithuanian Rampart (Litovsky Val), bulwarks of the forts "Der Dohna", "Wrangel", Grolman" (read: towers "Dohna", "Wrangel" and bulwark "Grolman" — note by А.О.). 135 officers and 3700 soldiers of the enemy surrendered".

I think that reminiscences of the Königsberg assault participant A.I.Petrikin ("Kaliningrad Truth" ("Kaliningradskaya Pravda") were the closest to the truth:

"During the first days of the Königsberg assault, Soviet soldiers fought in other districts of the city. And only by the end of the day 8 April, the 343rd rifle division reached the lake (now Upper Lake), and the 307th went a little further to the north. The enemy immediately met Soviet soldiers with heavy fire from the "Wrangel" tower.

The commanders decided to make a detour around the lake, that was done. Only in the second half of the day 9 April troops of the 307th rifle division came close to the "Wrangel" tower from the northern side. There was no order to take it by assault, as a the time negotiations on cease-fire with the Königsberg commandant on his request. Soon, the military post surrendered and admission of captives began.

In the meantime, there were no changes in "Dohna". Garrison of the tower, where the commanders and the rest of the Grenadier regiment anchored, did not hurry to surrender. Though there was no hope. The coming from the south soldiers of the 5th guards rifle division continued to move towards the lake at the same time, soldiers of the 307th division were still close to the tower. Only on 10 April in the morning, blocked from the north and south, realising the idleness of resistance, the fascist garrison of "Dohna" surrendered by hanging the white flag".

In the book by former Königsberg commandant O.Lasch "That is How Königsberg Fell", there is a scheme of location of the most significant city facilities that were held by the Germans at the moment of capitulation. Towers "Dohna" and "Wrangel" are also among them.

Garrisons of these towers did not fulfill the commandant order to lay down the arms on 9 April 1945, or there was no connection to them. Thus, the military posts surrendered on 10 April 1945 in the morning.

The battlefield newsreel of the documentary "The Königsberg Assault" shows the moment of hoisting the banner of Victory above the "Dohna" tower. Unfortunately, names of two soldiers who did this historical action are still unknown. We can only assume that were soldiers from the 307th or 5th rifle divisions.

Based on material from the book by A.V.Ovsyanov "The Fortress above he Lake. Notes on the Königsberg Architecture History: "Dohna" Tower and its Vicinity". 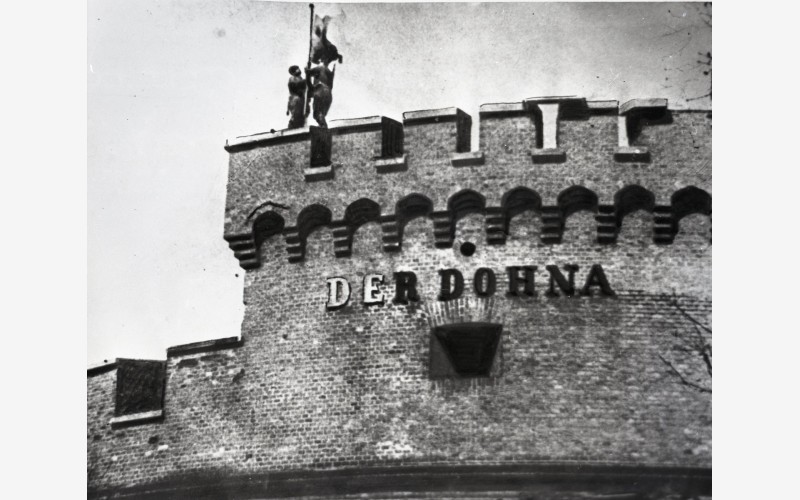 On 10 April 1945, soldiers of the Soviet Army hoisted the banner of Victory on the "Dohna" tower. 1945. The photograph was granted by the State Archive of Kaliningrad Regiona 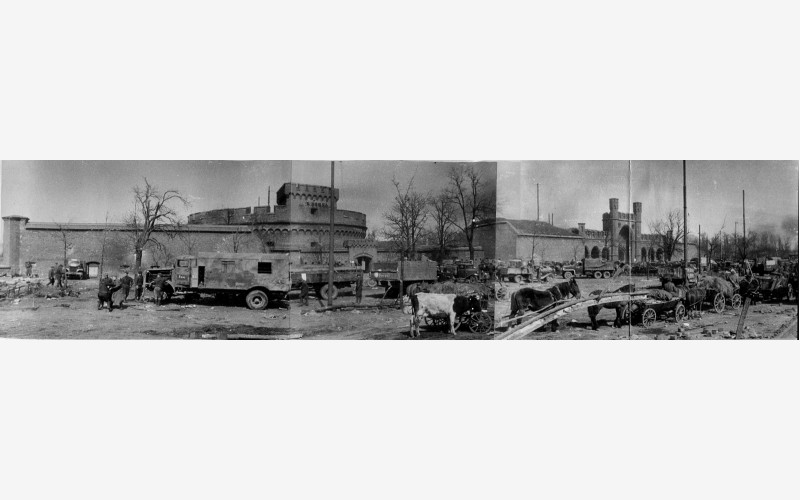 A panoramic view to the "Dohna" tower and Rossgarten Gate. 1945. 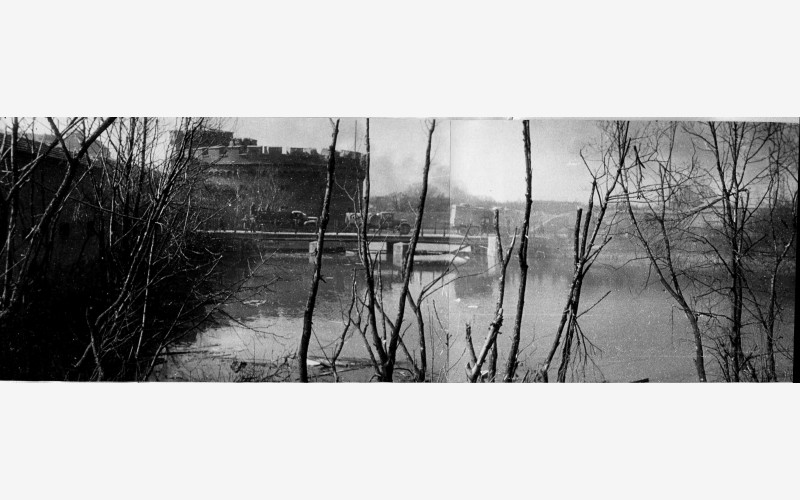 View to the "Dohna" tower from the side of the graff. Military equipment crossing the brigde through the Rossgarten Gate. 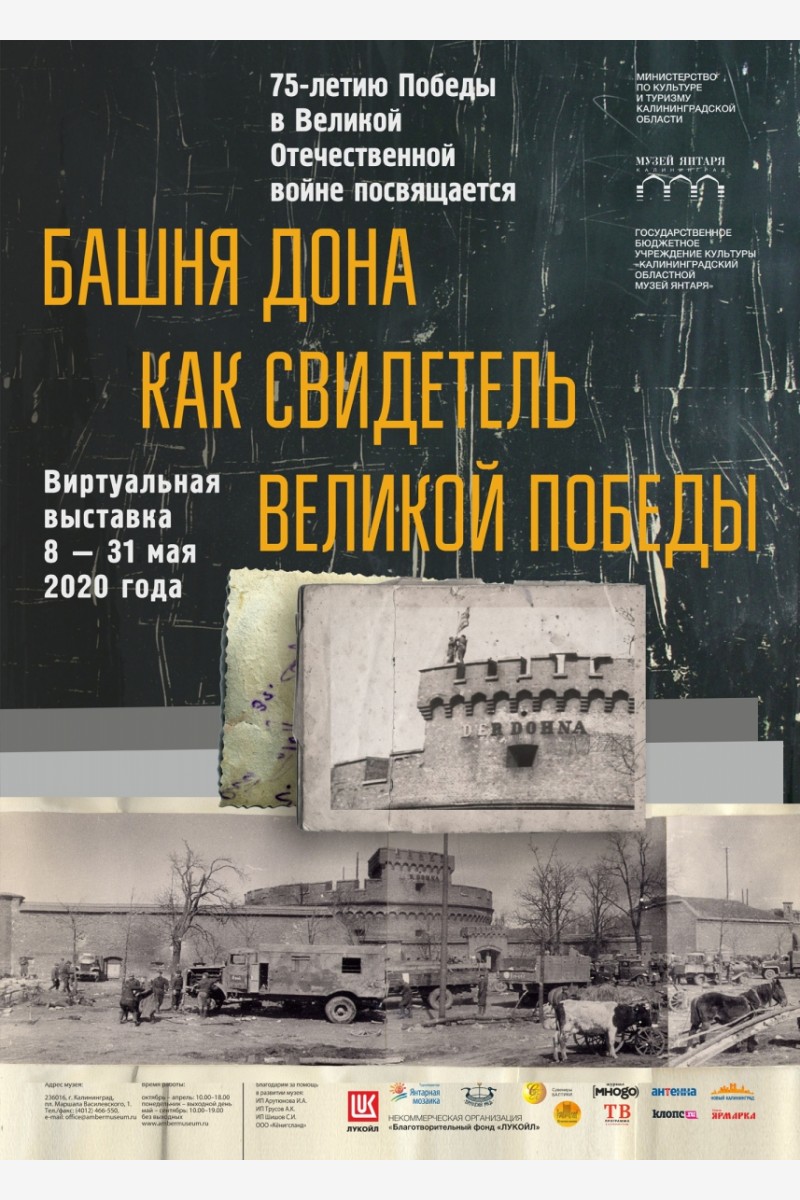