Building of the Museum The tower is the historical and the architectural memorial of the mid of the 19th century, being the part of an entire defensive fortification, which also includes Rosgarten Gates. The history of complex is connected with the Napoleon wars, town-planning development of Koenigsberg, and the events of the Second World War.

On the 5th of April 1843 the plan of Koenigsberg defensive fortification was approved. It was decided to protect Verkhneye lake by two round towers. The towers were put at the double-range of weapons, which enabled to shoot through the lake’s surface by a gun cross-fire. The tower of Vrangel was disposed on the western lakeside, Dohna’s tower – on the eastern one.

Prussia was one of the first European countries, which used the ideas of Montalembert (1713-1799) in action, considering the multi-leveled gunfire to be the important and powerful factor of defence.

The tower was built in 1852-1853. The tower is round, with the diameter of 34 meters, the height of 12 meters; it has two floors and one underground with the basements.

When building the tower, the special fortification brick was used. It was going through the multi-firing hardening, on the principle of steel hardening. The stucco wasn’t used, since the brick was firmer and more durable in the local climate with its frequent rains, dampness, and mild winters. The brick imparted the beauty of design to the front of the tower.

The tower was equipped with the heating system of fireplace type (it didn’t survive), ventilation, sewerage and drainage. There was storage well. The thickness of the walls, durability and the good quality of the constructions made the tower the strongest point, which was able to withstand the enemy and long-lasting sieges, as well as to conduct all-round defence.

By the middle of the 19th century many construction elements of fortification architecture of Koenigsberg became decorative, being only the symbols of medieval tradition. It concerns the merlon parapet wall. In the tower of Dohn the merlon parapet is repeated twice on different levels. This is one of the most significant decorative elements, which perfectly accentuates the contour of the whole construction.

«The brick neo-gothic» style, which was typical for the architecture of Koenigsberg in the middle of 19th century; became apparent in cross vaults of the tower’s casemates and design of the outer wall. 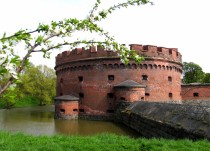 The main entrance to the tower from the side of the lake Verkhneye was under cover of the shooting-wall with the numerous embrasures. The socle of this wall is faced with the big cobblestones, which are hewed to each other and mortared by cement solution.

The space between the outer wall of the courtyard and the wall of anti-penetration screen was always full of water. The water was probably rising to the level of rusticated stone, flowing in freely from the Verkhneye Lake.

Nowadays the concrete dam was installed under the bridge. It prevents water flowing since the concrete in the rusticated stone is in bad condition; the drainage and damp coarse got out of order. The artificial moat, surrounding the tower was the obstacle in the way of enemy.

The depth of this moat was approximately 2-3 meters.

Before the beginning of the 20th century the tower of Dohna, as well as the whole bastion complex had been under control of military department. Before the Second World War the guard, which kept duty in the tower, consisted of 15 – 20 military men from the forces, based in immediate proximity. 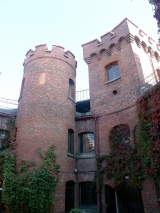 Due to creating of the new, up-to-date defensive line – front fortification; and the extension of the borders of Koenigsberg – the municipality began to purchase the fortification objectives within the precincts of the city. As early as before the First World War the ramparts, moats, bastions were partly liquidated, and on these territories the civil buildings were built. The surviving constructions, which were designated as historical relics and monuments of architecture, became the museums. The restoration works were carried out there, the special temperature and humidity conditions were maintained inside. In the premises of the former bastions there were located handicraft workshops, private shops, cafes.

The Dohna’s tower and the adjoining Rosgarten Gates were connected with tourism too, being the historical and architectural monuments. They were open for sightseeing; and made up beautiful recreation center in combination with the picturesque landscape of Verkhneye Lake and the forests on its side. There were numerous paths for walking, viewing grounds, cafes, a shop for souvenirs and a small photo-studio. Probably, the bow-shaped bridge was built at the same period.

With the beginning of the Second World War the Vrangel’s tower and the tower of Dohna became military installations.

The blocked up with brick embrasures were opened; the systems of security were put in order; the casemates’ cannons were brought and installed.

The former commandant of the Koenigsberg fortress Otto von Lacsh stressed in his book «Surrendering of Koenigsberg» that the old fortifications of the inner ring of the city, as well as the external fortresses; had been used as the main supporting installations at the defence of Koenigsberg.

Before the autumn 1944, ammunition, arming, and liaison depots had been based in the both towers. The air photography of 1944 shows the powerful broken-lined trench, which was dug close to the Dohna’s tower.

Different obstacles, standing before the trenches: hedges, chevaux-de-frise (turnpikes), wire entanglements, Bruno’s coils, were meant to function as the extra barriers on the way of SovieDuring the first post-war years the tower of Dohna hadn’t any permanent proprietors, being used by different organizations for the storage of containers and friable materials. The constructional elements of the tower began to ruin; the corrosion of bricklaying appeared as a result of the permanent dampness; destroyed damp course, ventilation, drainage. Before 1969 the storage facilities of «Voentorg № 540» had been located in the Dohna’s tower.

The works on the foundation of the Amber Museum, which started in 1972, prevented the intensive process of the tower’s destroying.